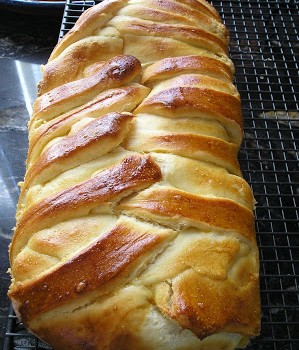 Not fancy, but tasty … and that’s already something!

The Daring Bakers propose this month a challenge for a yeasted coffeecake:  Jamie of Life’s a Feast and Ria of Ria’s Collection are thrilled to invite you to bake along with them this month!
“Mets la main à la pâte! It’s time to roll up your sleeves and put your hands wrist deep in some smooth, silky dough and create something oh-so sweet!”
And so I did. Yeah, I know, beauty is not everything in life… but… appereance is somehow important. That’s why my braid went to my parents’
and the wreath stayed at home for tea-time, as you may understand! My kids told It was more like a white lava volcano than a coffeecake.
But the story started wonderfully: I’ve been trying lately new flours. I’ve recently met the owner of an internet-based company which sells flours and baking tools nationwide (Spain). He finally got me convinced to try new flours, locally milled and most of them locally grown too, and organic besides. The company is called “El Amasadero“. The owner  belongs to a several generation baker’s family but he got the business renewed. He called the company by the place where dough was keaded (“amasar” is to knead, “amasadero” is where you knead) in an Andalusian traditional bakery. He comes from Alhaurín El Grande in Malaga (Spain).
So I used and organic strong flour, which was perfectly suited for this sweet and enriched dough. I worked it by hand (wonderful experience) till perfectly smooth. It grew beatifully with a pinch of fresh yeast in the fridge by night. And in the morning disaster came as I did the wrong choice for a filling!
I did choose a wrong company for the meringue: sweet almond paste. It was too runny, as you can see.
The wreath did contain this filling in a better way … till I slashed it to prevent crackling in the oven.
The braid was worst looking before entering the oven, although it came out nicely once I trimmed off the overbaked almond paste + meringue outside the baked dough.
Here comes my recipe, but I advise not to choose this filling combination. You best try to pair directly the meringue with almond flour and cinnamon, for example, but skipping any paste as it will become runny in contact with the meringue. The dough recipe I used is a King Arthur Flour one for “Sour Cream Cinnamon Rolls”. It was published in Tthe Baking Sheet Newsletter in early spring 2009 (vol XX, nº 2, page 6). It is very forgiving ans easy to work with. King Arthur Flour also recommends it for Braids, such as their “Raspberry Cream Cheess Braid”.
Dough ingredients
500 gr strong flour
250 gr youghourt or buttermilk or sourcream
30 gr butter
100 gr sugar
5 gr salt
15 gr fresh yeast
60 ml water
1 egg
Filling ingredients
250 gr almond paste (original version, but almond flour recommended)
1 teaspoon cinnamon
3 egg yolks (2 for the filling and 1 for an egg wash)
1 teaspoon water (for egg wash)
3 egg whites
100 gr sugar
Preparation
Mix all dough ingredients and knead until you have a very smooth dough. You may knead by hand or in a bread machine dough cycle.
Let the dough rest until is doubled in bulk in a bowl covered with film.
Prepare the filling meanwhile: start whipping the egg whites. When a small foam is formed add a quarter of tyhe total sugar and continue beating. When soft peaks appear, continue adding sugar littele by little. Beat till you get hard peaks. You need a hard meringue.
Turn the dough out of the bowl, knead for a minute or two and divide in half. Yoy will have enough dough for two coffee cakes.
Roll your dough to a rectangle (30 cms x 20 cms is good).Mix your almond (flour better than paste, remember) with two egg yolks. Cover your dough with the almond and egg yolk mixture and sprinkle with cinnamon (or any other spice you may want to add, such as ginger, cardamon, aniseed, …). Spread the meringue on top. Roll it up like a jelly roll if you want a wreath. Seal the dough into a circle. If you insert a buttered glass in the middle, it will help keeping the round form as it rises.
Let it stand and rest for one hour, while your oven preheats to 180º. Brush the top with the last egg yolk, lightly beaten with a teaspoon of water.
Bake for 25 to 30 minutes. Cool on a rack and … enjoy!
email 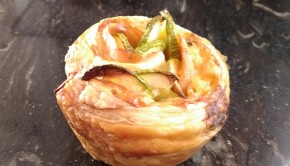 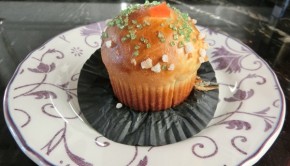 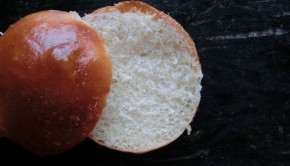 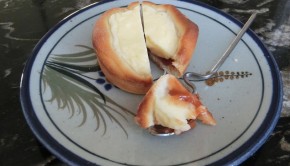